PURCHASE YOUR TICKET ONLINE FROM TICKETMASTER AT: http://www.ticketmaster.co​.uk/event/1F00456FCCC09F89​?camefrom=CFC_UK_MAMA_JAZZ​CAFE&brand=jazz_cafe

On This Show:
Keep The Faith are delighted to host a UKSoulJam / NeoSoulWW show special featuring Julie Dexter, former Soul II Soul front lady & now a stable part of the USA’s Nu Soul scene. Julie will be performing her critically acclaimed new album “New Again” for the first time in Europe. Also on the night our taste maker new acts to watch, the freshest the UKSoul scene has to offer live. At the end of the night the stage is opened up to the public for an Open Mic Jam – previous guests include Amy Winehouse, Marsha Ambrosius, Jeffrey Daniel of Shalamar – so keep your eyes peeled for those infamous surprise guests & email keepthefaithful@gmail.com if you want to perform. This show is a must for UKSoul & NeoSoul fans.
With strong support from our favourite poet Greeds, acoustic Soul-Jazz from Louise Golbey an every popular UKSoulJam artist seen most recently this year with George Benson, Jazz FM & Ronnie Scotts, & another popular UKSoulJam performer – the explosive Nu Soul & R&B of Sharon Rose & making their debut on UKSJ – the NeoSoul of Sturdy. + Our midnight Jam session open to the public at the end of the show.

ABOUT JULIE DEXTER:
Julie Dexter is a world renowned, award winning, British vocalist considered by many to be one of the most influential female vocalists of our generation. Having shared the spotlight with a host of cutting-edge artists, including Mint Condition, Jill Scott, Bilal, Omar, Loose Ends, Rachelle Ferrell, Ledisi, Eric Roberson and Raheem DeVaughn to name a few, Julie not only holds up her own with them but has been praised and respected by them too.

Born and raised in Birmingham, England, this classically trained artist composes and arranges her own music. Influenced by legends such as Nancy Wilson, Abbey Lincoln, and Bob Marley, as well as popular icons Omar and Sade, Julie takes classic soul to the heart of Artistry. Fans and critics across the globe have followed her journey through the circles of Jazz, Broken-Beat, Bossa-Nova, Reggae, Afro-Beat and Soul. Her dynamic voice was first heard in 1994 on “The Jamaican Beat” Vol 1 with Jazz Jamaica then later in 1997 on Dune Records’ release of J-Life, a European Jazz quintet formed by Gary Crosby and led by Jason Yarde. She later toured several continents with Jazz legend Courtney Pine as the lead vocalist for his ensemble. It was in 1999 that Julie took a leap of faith and moved to Atlanta, Georgia where she now resides. She launched her own label, Ketch A Vibe Records and in 2000 released the critically acclaimed EP Peace of Mind, followed by Dexterity (2002) , and Conscious (2005). Moon Bossa, a collaboration with Khari Simmons was released in 2007 and her single “Ketch A Vibe” was featured in national radio ads for Democratic Presidential Candidate Senator Barrack Obama.

For all show enquiries & if you would like to perform please email:
keepthefaithful@gmail.com 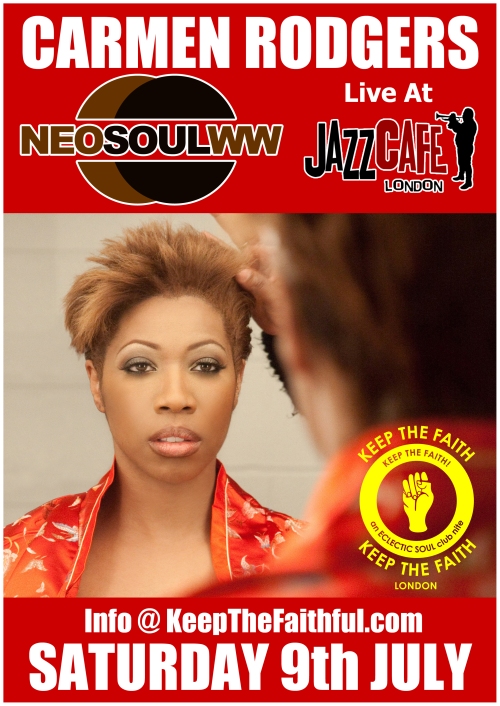 CARMEN RODGERS:
Carmen Rodgers took the Nu Soul scene & Jazz Cafe by storm over 5
years ago with her debut album “Free”. Raised in Mississippi, USA
Carmen is a formidable talent on the Neo Soul scene with recent
appearances on BET TV & live appearances & collabs with a who’s who of
the new Soul scene.
The critically acclaimed “Bitter Sweet” EPs were released last year
warming up up for the full album “Bitter Sweet” release due in May

“People wonder where I’ve been and what I’ve been doing… and this is
it. I’ve been growing. I’m no longer concerned with safety when it
comes to my music. I’m ready to be me. I decided to make this album as
real as real can get.” – Carmen Rodgers

PURCHASE YOUR TICKET ONLINE FROM TICKETMASTER AT:
Use this direct link to JULY 9th tickets:
http://www.ticketmaster.co.uk/event/1F00469BD36E5624?camefrom=CFC_UK_MAMA_JAZZCAFE&brand=jazz_cafe 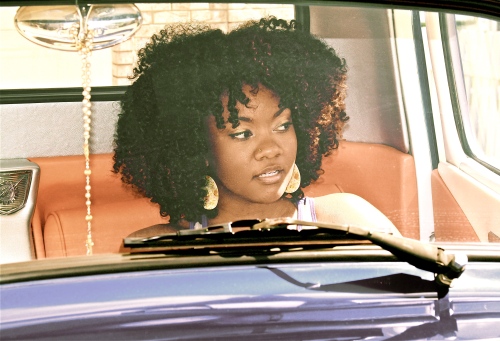 About MISHAL MOORE:
NYC based Singer/songwriter Mishal Moore and her band, The Fantastic Souls, spent 2010 performing to audiences across the east coast of America. From ‘spotlight’ performances such as Musikfest (in Bethlehem, PA), to opening for artists such as Zee Avi. Garnering critical acclaim for her live performances at some of New York’s legendary venues such as The Knitting Factory, SOB’s, Living Room and Arlene’s grocery (to name a few), Mishal has received dynamic responses.
Mishal is currently preparing for her album release. Her third, highly anticipated album ‘Bleed Out’ is due for release under Strictly Rhythm/Warner/Ill Friction Records in June 2011. It was produced by 2010/2011 grammy nominated Kenny Dope and features her singles, ‘It Ain’t Over’ and ‘Oh Lord’, which was licensed by Vanity Fair in their 2010 promotion of the Oscars. Be sure to catch Mishal on this first European tour of her new album “Bleed Out”

Inside The Madam Chi Lounge: